Ambient indoor localization is a research field that studies indoor localization systems based on ambient signals of opportunity, such as those from broadcasting TV and FM radio stations or GSM networks. By using already existing high-power transmitters, such systems provide very wide coverage (in contrast to current short-range solutions). However, the need for specialized receivers and laborious data collection complicate further research in this area, despite the promising initial results.

AmbiLoc solves this problem by providing a ready-made dataset of ambient radio fingerprints. The dataset has been systematically collected in multiple testbeds, including large-scale and multi-floor buildings, over the course of one year. Using AmbiLoc, any researcher can quickly experiment with ambient indoor localization, create, evaluate and compare novel localization methods. 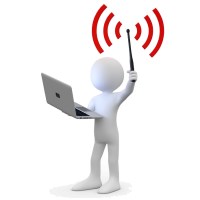 AmbiLoc is a collection of ambient radio fingerprints (RSS and more), collected in multiple predefined locations across several testbeds. All the locations were systematically sampled in a time-lapse manner: 2-second long samples for each radio type, at each location, approximately twice a month, during one year.

For attribution, please use this reference:

The following list includes publications based on and related to AmbiLoc.

AmbiLoc is part of the INDOORS project lead by Dr. Andrei Popleteev and funded by the National Research Fund of Luxembourg.